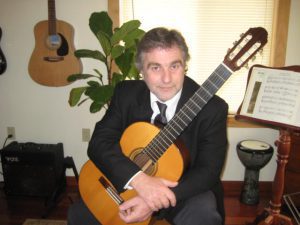 There is not currently a guitar teacher at Starbird, but here is a local contact:

Performing solo at local restaurants and hotels, he plays a blend of classical, jazz and popular music. Since 1990 he has also performed as a classical soloist and as part of the Portland Flute and Guitar Duet, performing at weddings and private events.

Dennis has always made teaching a major part of his life’s work. He started his teaching career in 1980. Since then he has had many students of all ages and abilities. As a teacher as well as a performer, he has always taught and played different styles of music from electric blues and rock to acoustic folk and classical.

Order sheet music online through our partnership with Hal Leonard: