The Yamaha ENSPIRE ST Disklavier is a modern reproducing [“player”] piano, which provides full recording and playback functionality on a traditional acoustic piano. It also features the patented Yamaha SILENT Piano™ System for playing with headphones. This is not your grandmother’s player piano. It has many surprising features [check out the video below!]– truly some of the most cutting-edge technology in piano development.

Come on down to try it out, and enjoy rock bottom pricing on the 5’ Baby Grand ENSPIRE ST (model DGB1K ENST; specs here), which is currently our featured piano! This offer CAN be combined with Yamaha’s special financing spring sale, so it’s a double deal!

Disklavier Education Network is a great resource for ENSPIRE information, including its own “History” page, which describes improvements since the previous generation, basically providing a handy summary of advanced features/setup.

At the heart of every Disklavier is superb Yamaha acoustic piano – the most recorded and performed-on pianos in the world. Expressive and elegant Yamaha pianos have been revered for their beauty and musical range for over 100 years. Watch the keys & pedals move while this beautiful instrument plays the sounds that can only be produced by a finely crafted acoustic piano. 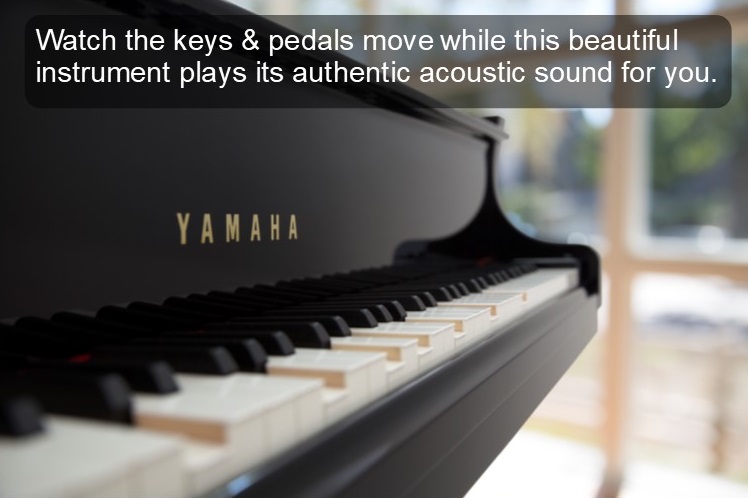 The Disklavier recreates every keystroke and pedal movement of the original performance,  portraying every nuance of the artist’s intention.

It all started with playing back beautiful piano solos, but the latest Disklaviers also offer piano ensemble performances, in which the acoustic piano performance is enhanced by vocals and backing instrumentation played through the piano’s speaker system. 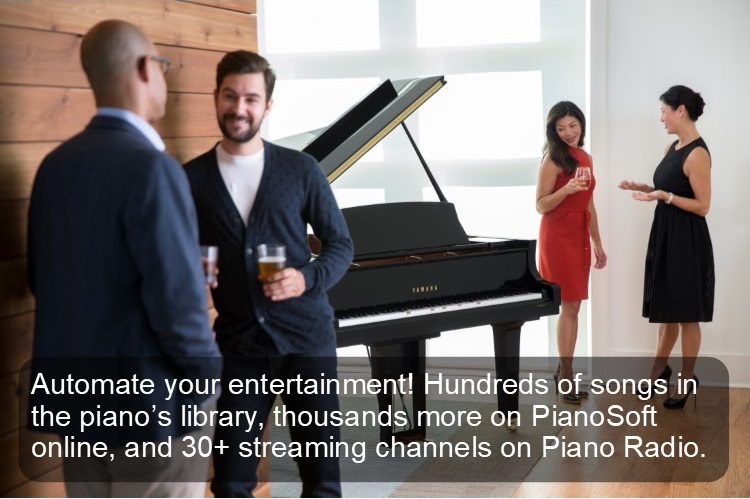 You can also enjoy streaming piano performances via Disklavier TV, which uses video sync to let you to watch artists on TV while YOUR piano plays their performance. 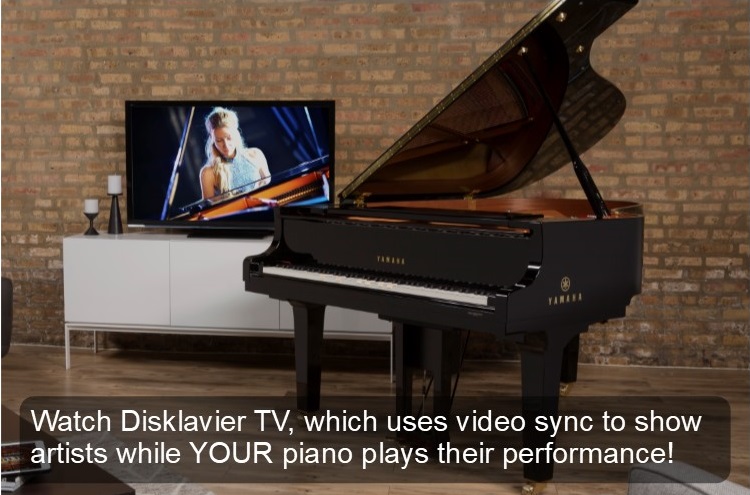 Wireless device control makes controlling your instrument fun and easy. The ENSPIRE Controller App, for iOS or Android, puts your favorite piano performances in the palm of your hand. You can also explore other exciting Yamaha piano apps , such as My Music Recorder, which is used in the Disklavier Double Takes video above. 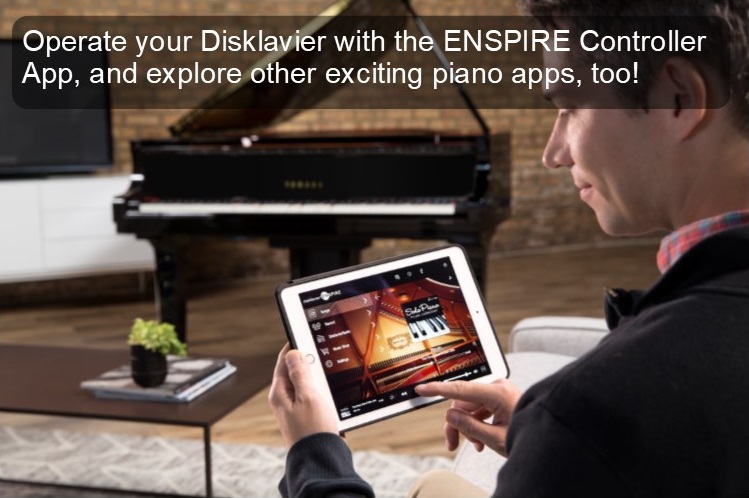 Integrated SILENT Piano™ technology allows you use headphones to listen, learn and play without being disturbed or disturbing others. 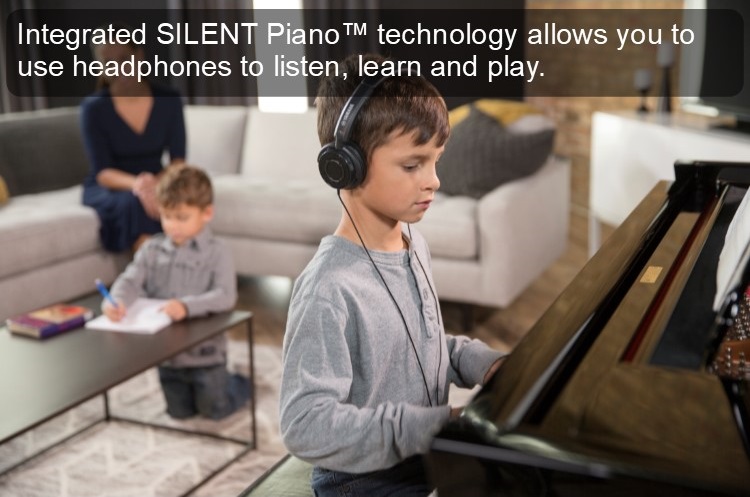 Record and critique your own performances. You can even share them with other Disklavier users. Optical key, hammer, and pedal sensors capture every nuance of the performance, resulting in unparalleled acoustic playback accuracy. Precision playback gives writers and composers the ability to instantly review their musical ideas and creations. 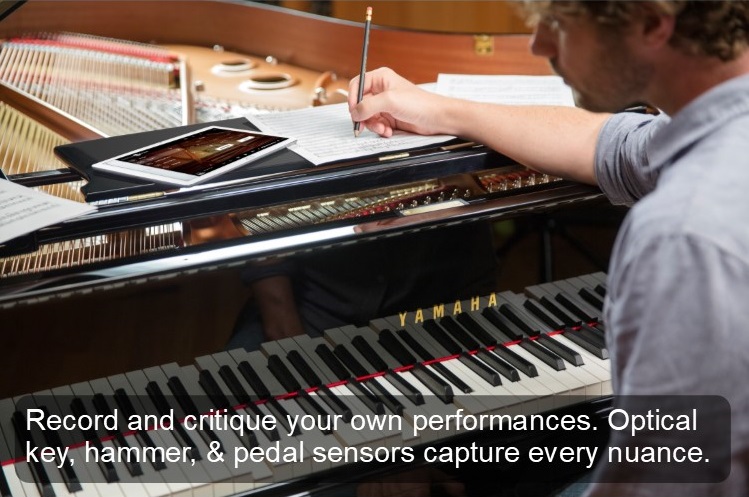 The Disklavier can be easily integrated into home and professional studios. With audio recording capability and an excellent speaker system, it can be used as a standalone music production instrument. And it can even combine digital recording & playback with the piano’s acoustic reproducing ability.

The Disklavier can generate digital sounds and can be used as a keyboard controller so you can find even more inspiration exploring a full palette of instruments. MIDI and audio connectivity allows the Disklavier to be integrated with any modern recording device, and built-in audio outputs allow the instrument digital sounds to be routed through installed sound-enforcement systems.

Disklavier Education Network is a great resource for ENSPIRE information, including its own “History” page, which describes improvements since the previous generation, basically providing a handy summary of advanced features/setup.

“It’s crazy to think that the notes I’m actually playing can impact the future of music…that a little kid, sitting in their living room, can put their hands on the piano and feel the keys move up and down…and experience the exact intention of what that song means to me. To share in those moments, to influence and inspire…for me, there is no greater reward.” – Jon McLaughlin

Order sheet music online through our partnership with Hal Leonard: